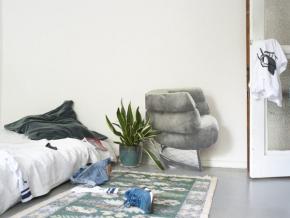 Domestic OptimismEvent
Domestic Optimism: With Emma Wolf-Haugh
Colonial aesthetics, obscenity trials, masculine hysteria, crime scene photography, sexology, the production and obfuscation of the lesbian throughout modernity, and the contemporary collapse of post-war social housing projects, all intersect in Domestic Optimism – Sexually Dissident Domestic Design, a critical queer and working class reading of architecture, furniture, and modernist aesthetics. The performance enacts forms of inscription, temporal displacements, and slippages from a much-ignored ‘sapphic’ modernity, making a mess of outdated museum display and exhausted historical legacies. The designer Eileen Gray has been an important figure in the project’s research, not as a singular heroic modernist fit for canonization, but as a collectively involved queer woman, part of an extended peer group of dykey women makers in Paris throughout the early twentieth century.

Emma Wolf-Haugh is a visual artist and educator. Weaving together installation, performance, publishing, and collaborative workshop techniques, she is interested in re-orienting attention in relation to cultural narratives, and develops work from a queer/feminist questioning of what is missing. Her previous experience in theatre and queer DIY club scenes has led to a continuing engagement with the aesthetics of club culture, along with questions of spatial politics and an incorporation of theatricality as a means of making propositions. Emma is co-founder of the artist collective The Many Headed Hydra, together with Suza Husse. She edited the anthology Having A Kiki: Queer Desire & Public Space (2016), and was recently artist-in-residence at the Irish Museum of Modern Art (2019/2020). www.emmahaugh.com
2020