Video
Adi Kuntsman Belonging, Violence, Complicity: From Queer Diaspora to Queer Necropolitics
How can we think about queer longings to belong without disregarding the complicity of queerness in racial, militarist, and colonial formations? What are the ways to approach queer displacements critically yet responsibly? What is the queer currency of ‘diaspora’ in a world where only some queer lives matter while others are destined for erasure, oblivion, and death? This talk is a meditation on the political, geographic, and conceptual terrains where ‘queer’ meets ‘diaspora’ – a meditation which draws, in part, on my own work on post-Soviet queer migranthood in Israel/Palestine, on queer necropolitics (with Jin Haritaworn and Silvia Posocco), and includes a virtual journey into the last two decades of critical queer scholarship. 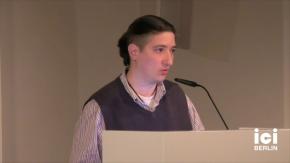 Video
Adi Kuntsman Response
Adi Kuntsman, Response to the keynote Damani J. Partridge, ‘After Diaspora, Beyond Citizenship: Articulating ’Blackness’ as a Universal Claim in Post-Holocaust Germany’, part of the Conference Diaspora and its Others, ICI Berlin, 27 March 2015, video recording, mp4, 02:13

Time on the Move

Our world is going through a peculiar moment, one for which there doesn’t seem to be a proper name yet. Since naming our time is part of what is at stake, Achille Mbembe will suggest that in the midst of the current dread and confusion, one thing at least is clear: ours is a time of planetary entanglement. But entanglement is not all that characterizes the now. As it happens, times of planetary entanglement are propitious for all kinds of escalations, the renewed production of things, forms, and events both baroque and dystopian, if only because such events generally strive to generate their own actuality through sheer excess and stupefaction. The lecture will focus on one such modality of the now, negative messianism, and its relation to the politics of pure violence.

The lecture will be followed by a discussion with Sarah Nuttall. The event will be moderated by Russell West-Pavlov (‘Literary Cultures of the Global South’, Eberhard Karls Universität Tübingen).

Achille Mbembe is research professor in history and politics at the Wits Institute for Social and Economic Research, University of the Witwatersrand, Johannesburg. He has taught at Columbia University, the University of Pennsylvania, the University of California, Berkeley, Havard University, and at Yale University. He has written extensively on African history and politics, including La naissance du maquis dans le Sud-Cameroun (1996). On the Postcolony was published in 2000 in French, in English in 2001. His Critique de la raison nègre appeared in 2013, with a German translation in 2014, the English translation this year, and Politiques de l’inimitié in 2016, with the German translation due in 2018.

Sarah Nuttall is the director of the Wits Institute of Social and Economic Research, University of the Witwatersrand, Johannisburg. She has held teaching positions at the University of Stellenbosch, Yale University, and Duke University. She has edited multiple volumes and her monograph Entanglement: Literary and Cultural Reflections on Post-apartheid explores mutuality, transgression, and embodiment in contemporary South Africa.
2017