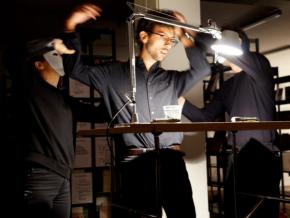 ICI Library Event
…Where Was I?
I am hungry to be interrupted /
For ever and ever amen /
O Person from Porlock come quickly /
And bring my thoughts to an end.

Stevie SmithThree stanzas into writing his poem Kubla Kahn, Coleridge tells us, he was interrupted by the now infamous ‘Person from Porlock’, bringing him irrecoverably out of the zone. A century and a half later, the poet Stevie Smith hungers for the ‘Person from Porlock’ to come back quickly, and bring her thoughts to an end. Today, we are said to be living through a crisis of attention, constantly diverted by notifications, multiple tabs, sensationalist headlines, clickbait, 24/7 multitasking, and a spiralling number of distracted-driving fatalities.

Within the context of the ongoing ICI Focus ERRANS environ(s), ‘Where was I?’ will explore questions of zoning in and zoning out, attending to attention and its social, political, and aesthetic implicationsin everyday experience. What does it mean to be ‘in the zone’ and what happens when we ‘zone out’? What is the role of interruption in the creative process? What escapes are afforded by absorption, and who has been historically excluded from distraction-free zones?

Please join us in the ICI Library for a performance, drinks, and… where was I?
2019