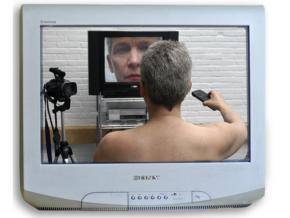 Lecture, Performance Video
Janice Perry Mourning Derrida
Who’s afraid of Jacques Derrida? Performance artist Janice Perry brings us a video ‘dialogue’ with the father of deconstructionist philosophy. Perry’s artist talk is an intimate portrait of the creative process that goes beyond the ordinary definitions of ‘performance’ in a presentation of work that deconstructs deconstruction itself – with intelligence, humour, and charm.

On the occasion of the death of the philosopher Jacques Derrida in 2004 U.S.-American comedian and performance artist Janice Perry performed Derrida, alone in her apartment in Frankfurt for three days, imitating his movements and gestures, in an attempt to embody some of his theories of deconstruction.
Documentation of this performance led to an edited video montage of the documentary film ‘Derrida’, shown simultaneously with an original video and supplemented by an artist talk/live performance.

With this work-in-progress, Perry gives an introductory overview of Derrida’s philosophy for beginners and reminds those who know him of the layered complexity of his work. Mourning Derrida both mourns the death of Derrida and deconstructs deconstruction itself.
2007