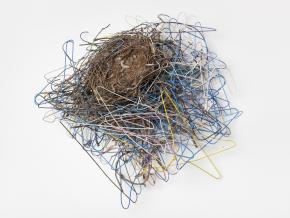 Art of Encounter: On Non-Human Art Production
A vast set of associations surrounds both popular and academic ideas of what art actually entails. Art is assumed to be expression, experience, and intention — and often at the same time. Intentionis a difficult concept; it might feel conscious, rational, or substantiated, but is that really the case? The human mind is a notoriously unreliable piece of equipment and hardly capable of understanding its own intentions. In order to discard the assumptions that one has to be conscious to make art, one could hark back to surrealism and place art in the domain of the sub- or un-conscience. But then what’s to keep us from stretching things a little bit further, proclaiming non-human natural entities to be capable of art, of authorship?

This event stems from the research project and exhibition ‘Reading by Osmosis’ (Amsterdam, Zone2Source/Het Glazen Huis, 16 February – 28 April 2019, curated by Semâ Bekirović), focusing on artworks made by non-human artists — by animals, trees, the wind, and other entities and processes. Bekirović’s project focuses in particular on works that are inspired by the human domain, or deploy humans or man-made objects as tools and material and has resulted in the book Reading by Osmosis – Nature Interprets Us.

After a short presentation of Bekirović’s project, the evening will begin with a lecture by Michael Marder.

The lecture will be followed by a discussion with ICI Fellows Daniel Liu and Alison Sperling on the possibility and consequences of non-human art production. 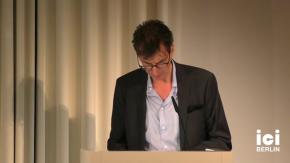 Gordon, Peter E. Between Realism and Utopia: Reflections on Adorno and 'The Authoritarian Personality'
Recent years have witnessed the rise of authoritarian political leaders as well as violent and authoritarian behaviors from numerous groups, across different countries. Recent events suggest that there is a dynamic of obedience and submission and a constellation of symptoms similar to what Theodor W. Adorno, in 1949, diagnosed under the label of ‘authoritarian personality’. As Peter Gordon notes, in The Authoritarian Personality, Adorno didn’t mean to isolate a specific psychological ‘type’, rather he captured the subjective effects of an irrational social order. It is the fascist potentiality of the modern cultural context as a whole he tried to uncover.

The phenomena he pointed out — the mechanisms that underlie anti-Semitism, the psychic effects of authoritarianism, the porosity between capitalism and fascism, the loss of a recipient for the critique produced by the workers’ movement — are highly relevant today. This is probably the reason why — without necessarily recalling Adornos’ work in detail — several analysts refer to his writings when they evoke the current transformations of democracy (the election of Trump, populism, illiberalism). To this extent, it may be interesting to return to Adorno’s research on the authoritarian personality in order to re-examine and update it. The purpose of this reconsideration is to produce new descriptions and analyses of authoritarianism, and to initiate a critical review of The Authoritarian Personality.

Peter E. Gordon is the Amabel B. James Professor of History, faculty affilitate in the Departments of Germanic Languages and Literatures and of Philosophy at Harvard University. His areas of research are in Continental philosophy and social thought in Germany and France in the late-modern era, with an emphasis on critical theory, Western Marxism, the Frankfurt School, phenomenology, and existentialism.  He has published Rosenzweig and Heidegger:  Between Judaism and German Philosophy (2003), Continental Divide:  Heidegger, Cassirer, Davos (2010), Adorno and Existence (2016). He has also co-authored Authoritarianism: Three Inquiries in Critical Theory with Wendy Brown and Max Pensky (2018). Earlier this year, he gave the Adorno Lectures at the Institute for Social Research in Frankfurt on ‘Adorno and the Sources of Normativity’. He wrote the introduction for the new edition of Adorno et al, The Authoritarian Personality (2019). His next book is Migrants in the Profane: Critical Theory and the Question of Secularization (forthcoming).