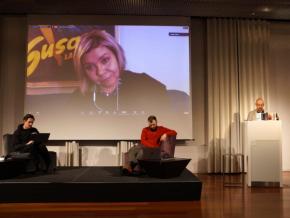 Infrastructures of Intimacy and the Deplatforming of Sex: Susanna Paasonen
Susanna Paasonen’s feminist and queer analysis focuses on the question of online pornography and new ways of connecting via platforms and chatrooms, as in her 2011 Carnal Resonance: Affect and Online Pornography. Taking exception from the prevalent techno-skepticism that summarizes online communication and representation uncontestably as forms of commodification and alienation, Paasonen’s talk ‘Infrastructures of Intimacy and the Deplatforming of Sex‘ discusses the stakes of the new potentials of getting together online – aesthetically, socially, sexually, and politically. For Paasonen it is the tactile dimensions of online encounters, more so than the visual, that affect us as ‘resonance’ or ‘grasp’ us.

This lecture series takes queer theory’s conversation about intimacy as a starting point to discuss some of its cultural possibilities, mediated forms, and philosophical trajectories in the context of Corona. 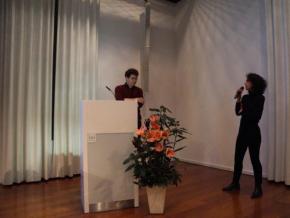 Sven Lütticken Trials, Tribunals, Reconstructions
This talk discusses reenactment strategies in the context of legal and paralegal reconstructions. The theatrical side of court cases has been recognized by a number of scholars and artists, as has the increasing importance of media such as video and digital simulations. As crime scenes are reconstructed and crimes reenacted, such theatrical restagings are not necessarily limited to “proper” legal frameworks. Activist trials and reenactments by activists, artists, and filmmakers introduce a paralegal performativity that may function as a “preenactment” of actual trials to come. From Pierre Huyghe to the Friends of Halit, Forensic Architecture to the tribunal NSU-Komplex, Lütticken will discuss cases in which reenactments are presented as evidence either of a personal and oneiric truth, or of actual events whose reconstruction can challenge official claims.

Sven Lütticken teaches art history at the Vrije Universiteit Amsterdam and theory at the Dutch Art Institute. He is the author of Secret Publicity: Essays on Contemporary Art (2006), Idols of the Market: Modern Iconoclasm and the Fundamentalist Spectacle (2009), History in Motion: Time in the Age of the Moving Image (2013), and Cultural Revolution: Aesthetic Practice after Autonomy (2017), and regularly contributes to journals and magazines such as New Left Review, Texte zur Kunst, e-flux journal, Grey Room, and Afterall.

Sven Lütticken, ‘Trials, Tribunals, Reconstructions’, lecture presented at the symposium Over and Over and Over Again: Re-Enactment Strategies in Contemporary Arts and Theory, ICI Berlin, 16 November 2017, video recording, mp4, 55:07 <https://doi.org/10.25620/e171116-1> 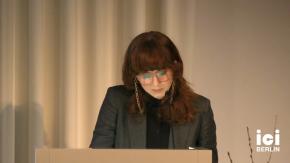 Nadine Hartmann Hashtag Confessions: What Can Psychoanalysis Say About #MeToo?

Public feminism today travels by way of a technological update of collective speech acts of avowal and confession understood as already constituting political action — a practice familiar from 1970s feminism. And correspondingly, critiques of #MeToo have added little to the anti-feminist reactions of the 1970s. The talk argues that current activism warrants another look at two theoretical positions from the 1970s that related truth, speech, and sexuality — and were radically at odds with one another: Foucault famously denounced modern-day compulsory self-revelation as being premised on the dubious discursive linking of truth and sexuality and saw in psychoanalysis an agent of this confessional coercion. For Lacan, on the other side, the speaking subject is constituted by an unbridgeable gap between desire, knowledge, and truth, and hence, while the act of speaking may produce knowledge, it can never close the rift between knowledge and truth constitutive for the desiring subject. What is the constellation of sexuality, speech, and truth in feminist collective, mediated practices? What are the implications of ‘speaking up’ today? Can a reflection on the valences of recent confessional practices help force psychoanalysis to reposition itself in light of current feminist critiques?

Nadine Hartmann is a cultural theorist working in the field of psychoanalysis and feminist philosophy. She wrote her dissertation about philosophy and the girl, with an emphasis on Georges Bataille and Luce Irigaray. She is co-convenor of the feminist event series ‘Spellbound’, which examines phenomena of collective mental contagion and mass hysteria. 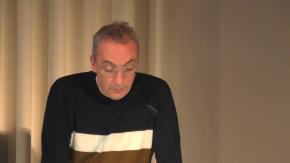 Didier Debaise Nature and its Others: The Invention of a Political Force
The moderns have invented a ‘nature’ and made it one of their most important political institutions. The talk will revisit this very singular adventure through which a number of local inventions, gestures, and operations, namely within experimental systems, have given birth to a new political force. Disconnecting this nature from the very conditions of its emergence and existence, the moderns have instantiated it as an essential actor within processes of normalization of practices and as a crucial instrument justifying the extension of their impact on all other territories. Today the question has become the following: How to resist the hegemonic tendencies of this modern version of nature in order to restore space and give back legitimacy to other ways of inhabiting the earth.

Didier Debaise is a permanent researcher at the Fonds National de la Recherche Scientifique (FNRS) and the director of the Center of Philosophy at Free University of Brussels (ULB) where he teaches contemporary philosophy. He is one of the co-founders, with Isabelle Stengers, of the Groupe d’études constructivistes (Geco). His main areas of research are contemporary forms of speculative philosophy, theories of events, and links between American pragmatism and French contemporary philosophy. He wrote three books on Whitehead’s philosophy (Un empirisme spéculatif, Le vocabulaire de Whitehead and L’appât des possibles), edited volumes on pragmatism (Vie et experimentation), on the history of contemporary metaphysics (Philosophie des possessions), and wrote numerous papers on Bergson, Tarde, Souriau, Simondon, and Deleuze. In 2017, two of his books appeared in English: Nature as Event: The Lure of the Possible and Speculative Empiricism: Revisiting Whitehead. He is currently working on a new book, Pragmatique de la terre. 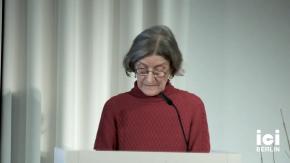 Marder, Michael Art’s Articulations
Michael Marder interprets the activity and role of art as an articulation of things, words, and worlds. Upon taking a look at two regimes of articulation — the spatial and the verbal —, he discusses it as a tool for imagining, bringing about, or simply discovering art without humans. Finally, to illustrate this point, Marder turns to plants, those consummate artists of existence, at every moment articulating and rearticulating themselves, organic and inorganic beings around them, and the world. Michael Marder is IKERBASQUE Research Professor in the Department of Philosophy at the University of the Basque Country (UPV-EHU), Vitoria-Gasteiz, Spain. His writings span the fields of phenomenology, political thought, and environmental philosophy. He is the author of numerous articles and fourteen monographs, including Plant-Thinking: A Philosophy of Vegetal Life (2013); Phenomena — Critique — Logos: The Project of Critical Phenomenology (2014); The Philosopher’s Plant: An Intellectual Herbarium (2014); Pyropolitics: When the World Is Ablaze (2015), Dust (2016), Energy Dreams (2017), Heidegger: Phenomenology, Ecology, Politics (2018) and Political Categories (2019). Michael Marder, ‘Art’s Articulations’, lecture presented at the discussion, lecture Art of Encounter: On Non-Human Art Production, ICI Berlin, 20 January 2020, video recording, mp4, 14:38 <https://doi.org/10.25620/e200120_2> 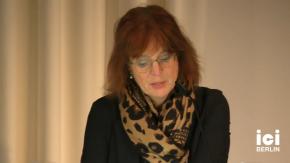 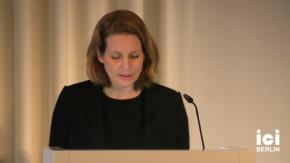 Wessely, Christina Milieus, Environments, Life Forms: Biology and Critical Theory in the Gulf of Naples
Since the German biologist Anton Dohrn founded its zoological station in 1872, scientists have been coming to Naples to study the foundations of modern biology. Soon, it became an international center for the life sciences, with a special focus on ecological questions concerning the ‘habits and conditions of life’, as its founder Anton Dohrn framed the station’s research programme.

At the same time, writers and philosophers rediscovered the Southern Italian metropolis, which had been a major travel destination for previous centuries. In the summer of 1925, the city witnessed a remarkable gathering: Walter Benjamin, Siegfried Kracauer, Theodor W. Adorno, Ernst Bloch, and Alfred Sohn-Rethel came to Naples, and their visits inspired them to reflect on quite similar questions — namely, the specific quality, range, and influence of surroundings, environments, and habitats — albeit from a historical materialist perspective focusing on the human subject and its socio-economic conditions.

Walter Benjamin and Asja Lacis used the term ‘porosity’ to describe Naples. Adopting this term as its key analytical category, the talk aims at relating these Neapolitan knowledge formations — biological and philosophical — in order to address some decisive aspects of modern ecological thinking.Christina Wessely is professor for the cultural history of knowledge at Leuphana University Lüneburg. She studied history and German literature at the University of Vienna and the Freie Universität Berlin, received postdoctoral fellowships from the Max-Planck-Institute for the History of Science in Berlin and from Harvard University, and held research positions at the University of Vienna and the Humboldt-Universität zu Berlin. Recent publications on the history of ecology include Löwenbaby (2019); ‘Watery Milieus. Marine Biology, Aquariums, and the Limits of Ecological Knowledge circa 1900’ in Grey Room 75 (2019), pp. 36–59; and the co-edited volume Milieu. Umgebungen des Lebendigen in der Moderne (2017). 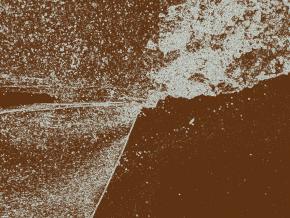 Eva Horn The Aesthetics of the Anthropocene
Art in the Anthropocene cannot be limited to a thematization of the many different dimensions of the current ecological crisis. Both the theory and the practice of art need to address questions of form. While the world is subject to a radical transformation through human interference, traditional categories of knowledge and experience are being called into question. How can aesthetic representation reflect this deformation of the human relation to the world? The talk will address three formal challenges that art faces in the Anthropocene: Latency — the fact that the fundamental processes of environmental change elude perception and representation; entanglement — the fact that humans are caught in the complexities of the Earth system, and scale — the fact that we are dealing with objects and processes on scales of magnitude that cannot be directly accessed by human understanding or control.Eva Horn is professor of modern German literature at the University of Vienna. Her areas of research include literature and political theory, disaster imagination in modern literature and film, cultural conceptions of climate, and the Anthropocene. She is author of The Secret War. Treason, Espionage, and Modern Fiction (2013), The Future as Catastrophe (2018), and, together with Hannes Bergthaller, The Anthropocene: Key Issues for the Humanities (2019, simultaneously published in German as Anthropozän zur Einführung). Eva Horn, The Aesthetics of the Anthropocene, lecture, ICI Berlin, 4 December 2019, video recording, mp4, 57:01 <https://doi.org/10.25620/e191204> 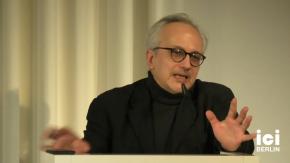 Pinotti, Andrea An-Icons: Environmentalizing Pictures
Immersivity and interactivity in virtual environments have enabled the production of pictures that elicit in the user an intense feeling of being incorporated into a quasi-real environment. These pictures aim to attain immediateness (concealing an extreme technological mediateness), unframedness (bypassing the traditional separateness between image and reality and between images and spectators), and presentness (simulating a lack of referentiality). In doing so, they paradoxically challenge their status as images-of, that is, as icons: they are veritable ‘an-icons’.

The lecture presents some of the main issues addressed by the ERC project ‘AN-ICON’ (2019–2024), exploring ‘an-iconology’ as a new paradigm able to address the challenging landscape of contemporary image production and consumption. Subjects relating to an-icons are no longer visual observers in front of images isolated from the real world: they become experiencers living in a quasi-world that offers multisensory stimuli and allows sensorimotor affordances and interactions. These new forms of image experience require a new understanding, as they are bound to radically change human relations to images.Andrea Pinotti is professor of aesthetics at the Department of Philosophy of Università degli Studi di Milano. He recently was EURIAS Senior Fellow at the Paris Institute for Advanced Study (2017–2018) and received the Wissenschaftspreis of the Aby-Warburg-Stiftung (2018). His main research interests include aesthetics, art theory, art history, the morphological tradition, image theories, and visual culture studies, memory studies, and theories regarding empathy. He is currently in charge of the ERC-funded project ‘AN-ICON — An-iconology: History, Theory, and Practices of Environmental Images’.