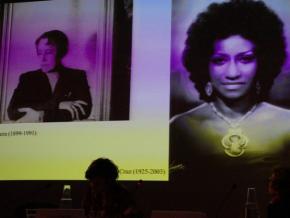 Over and Over and Over Again: Re-Enactment Strategies in Contemporary Arts and Theory
Since the 1990s, re-enactment has emerged as a key issue in the field of artistic production, in theoretical discourse, and in the socio-political sphere. Current re-enactments question the ability of the present to unpack, embody, and disentangle the past. Thus, to re-enact is to experience the past by reactivating either a particular cultural heritage or unexplored utopias. To re-enact means not to restore but to challenge the past – to not merely repeat it, but to interpret and translate it – in the present and for the present – or for the future.  History thereby enters a special temporal dimension, that of a possible and perpetual becoming, opening a space for invention and renewal.

The symposium investigates the issue of re-enactment through a discussion at once conceptual and practical. How, and to what extent, does recent history engage in a creative dialogue with a more distant past supposedly reactualized through re-enactment? This process of creative repetition branches out into at least three directions: (1) the return/survival of the past understood as generating meaning and values for both present and potential future/s, in terms of what one could call a symbolic archaeology; (2) an epistemological-axiological challenge to the traditional dichotomy between true and false, original and copy; and (3) a performative bodily practice that physically re-stages events.

Methodologically, the notion of re-enactment will be approached from three directions: the archive, the arts, and curatorial practice.

Dante’s Political Modernities: Claude Lefort Reads the Monarchia
In the second decade of the fourteenth century, Dante wrote the Monarchia, a treatise of political theology deeply rooted in the philosophy of his time, yet conspicuously original in its treatment of secular and ecclesiastical authority. Immediately attacked by the Church, and later banned until 1881, the treatise was long relegated to the margins of the history of political theory. In 1993, Claude Lefort re-established the importance and contemporary relevance of the treatise in an extensive introduction, entitled ‘La modernité de Dante’, for a French translation of the Monarchia.

The symposium takes its cue from Lefort’s suggestive invitation to reconsider Dante’s endorsement of a ‘temporal monarchy’, that is, a secular order restricted to humankind’s common pursuit of earthly happiness and hence fully independent from the Church. Lefort sketches the political reception of Dante’s treatise, referenced by humanist advisors of princes, jurists of absolutist rule, and historians of nation-states alike, which, for him, testifies to a profound historical eccentricity of Dante’s conception rather than a teleology inherent to the modern history of the West. For Lefort, ‘the past always interrogates our present’.

But how can a text of many context-bound contestations such as the Monarchia interrogate present political circumstance? Can Lefort’s reading serve as a model of a historically reflected political philosophy? How to account for historical efficacy without risking a reamalgamation of history and ideas into a redemptive philosophy of history? How to make sense of the entanglement the Monarchia posits between knowledge, happiness, and politics? What is Dante’s conception of the common, what its relation to an essentially collective knowledge that can only be pursued in universal peace?

The symposium brings together scholars from different fields in order to reconsider the Monarchia in dialogue with Lefort’s suggestions and discuss its potentials and limits for imagining politics today.