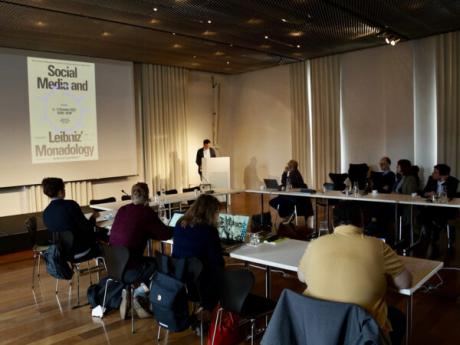 The Yale-Düsseldorf Working Group on Philosophy and Media juxtaposes thought figures from the history of philosophy with concrete media-technical ensembles under the rubric ‘Artificial Experience’. More specifically, it studies the artificiality of human and non-human experience as media. The hypothesis is that historical philosophical figures offer different perspectives on traditional as well as current media-technical objects. Following Gilbert Simondon’s theory, the group also hopes to uncover specific modes of experience embedded in certain media-technical ensembles, modes which have remained hidden because the better thought figure has not yet been tested.

This workshop will juxtapose Leibniz’s ‘monad’ — understood as an atomistic and highly perspectival account of experience — with current media technologies (for example, social media).

The workshop is divided into two sessions.

Two further workshops organized by Martin Doll and Paul North on thought figures from Kant and Husserl will follow in 2023.