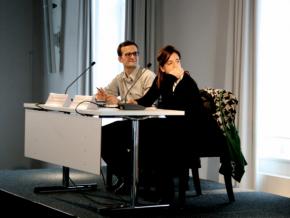 Conference
The Power of Disturbance: Around Elsa Morante’s Aracoeli
Aracoeli (1982) is the last novel written by Elsa Morante (1912-85), one of the most significant Italian writers of the twentieth century. From Menzogna e sortilegio (1948) and L’isola di Arturo (1957) to La Storia (1974), Morante became an increasingly important author, provoking animated debates in the Italian and European literary and cultural milieux. Her final novel, by contrast, was received with profound aversion and almost unanimously dismissed as a desperate writer’s self-destructive attempt at a tragic parody of everything she had previously written.

If it is indeed true that Aracoeli returns to topics fundamental to all of Morante’s texts and questions them in an often disturbing manner, our hypothesis is that the novel cannot be reduced to a deep expression of despair, but, rather, succeeds in confronting crucial philosophical and epistemological questions in an original and profound way: through its narrative inquiry into the relationship between mother and child, Morante’s text creates a ‘hallucinatory’ representation of the original mother-child dyad, questioning the classical distinction between subject and object and offering a theory for the genesis of language and meaning.

The protagonist’s journey to Spain in search of his dead mother forms the poetic and theoretical nucleus for the novel’s manifold perspectives and motifs that contaminate and disrupt literary, psycho-analytic and political paradigms as well as categories of identity, gender and sexuality. In particular, the novel’s intricate structure allows different levels to interact with one another, producing asymmetries and contrasts that represent a form of resistance towards the hegemonic and totalizing claims of the logos.

The Berlin symposium sought to re-evaluate the complexity of Morante’s novel by reflecting on the manifold tensions that it stages and that are also present in contemporary philosophical discourse (from feminist to queer to political theory) and authors. It included an international conference combining scholars from different disciplines and cultural traditions, a staged reading and a talk by the poet Patrizia Cavalli.
2008