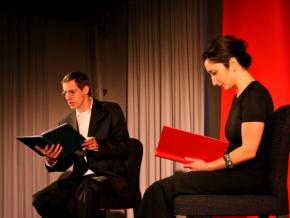 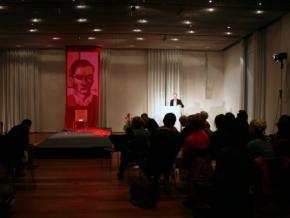 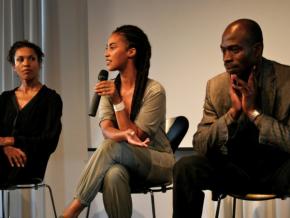 Staged Reading Video
Yesterday, Tomorrow
’Yesterday, Tomorrow’ is based on Nuruddin Farah’s book, Yesterday, Tomorrow: Voices from the Somali Diaspora. It is a portrayal of the personal stories of people who, due to political instability in postcolonial Somalia, find themselves forced to flee their homes, cross borders and become refugees. Loss, borders and politics are at the very centre of this piece.

This staged reading brings to mind the 125th anniversary of the Berlin Conference, where Bismarck invited 13 other European governors to divide the African continent into a series of colonial states and illogical borders, laying the framework for more than a century of civil strife. The individual stories and subtle portraits of the countries of exile create a moving image of life between different worlds.Playwright Amy Evans seeks through her work to critically examine the impact of displacement, alienation and political violence on the human spirit. Her first play, Achidi J’s Final Hours, was inspired by the true story of Mareame N’Deye Sarr, a young woman who was killed in a confrontation with German police in Aschaffenburg in July 2001. Her newest play, The Most Unsatisfied Town, based on the death-in-custody of Oury Jalloh, was completed while in residency at the ICI Berlin earlier this year.

Grada Kilomba’s literary works explore the fields of memory, trauma and post-colonialism. Among others, she is the author of Plantation Memories (2008) a compilation of episodes of everyday racism written in the form of short psychoanalytical stories. Currently she is a fellow at the ICI Berlin, where she is writing her new book Kalunga based on the Orishas and the post-transatlantic experience of fragmentation, loss and colonial convalescing.

Michael Edode Ojake (actor) was born in 1961 in Lagos, Nigeria. He was a production assistant at the National Theatre in Lagos and studied Acting at the Academy of Theatre and Film in Sofia, Bulgaria. Since 1990 he lives and works in Berlin as an actor, director and author in film and theatre.

Araba Walton is a German actress and singer. She worked for five years with a number of theatre companies in London, until an engagement with the Musical ‘The Lion King’ brought her back to her home country. Currently she has a capital role in the movie ‘Berlin Calling’.

Nuruddin Farah is one of the most acclaimed contemporary writers. Born in 1945 in Baidoa, Somalia. Farah was sentenced to death in absentia for political reasons in 1976. After spending many years in exile in Africa, Europe and the U.S., he now lives in Cape Town, South Africa. He is the winner of the prestigious Neustadt Prize for Literature (1998) and a perennial nominee for the Nobel Prize for Literature. He is the author of numerous novels, including the Blood in the Sun-trilogy. His work has been translated into 17 languages. Knots is his latest novel. Literary Adaptation: Amy Evans and Grada Kilomba
Artistic Direction: Grada Kilomba
This staged reading had its premiere at the Haus der Kulturen der Welt on 2 December 2009.
2010 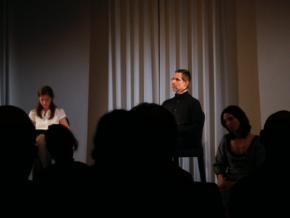