The Year’s Work in Terraforming

with Derek Woods
For many commentators, the arrival of the Anthropocene means that the Earth has become artificial. In a striking slip from literature to science, they suggest that humans have been unintentionally ‘terraforming Earth’ for generations. The tautological sound of this phrase — literally, ‘earth-forming Earth’, or making Earth earth-like — is an effect of its science-fiction origins. Coined by Jack Williamson in his story ‘Collision Orbit’ (1942), terraforming refers to narratives about making other planets habitable for terrestrial life. Some well-known examples are Octavia Butler’s Xenogenesis Trilogy (1987–1989) and Kim Stanley Robinson’s Mars Trilogy (1992–1996). In other words, the phrase ‘terraforming Earth’ tracks a reflexive fantasy: one that begins by projecting outwards, away from our planet, then bends back to Earth as a way of imagining the Anthropogenic biosphere.

This workshop will discuss the theory and politics of terraforming Earth. In ‘Terraforming Earth: A Theory of Ecotechnics’, Derek Woods looks at how terraforming has moved back and forth between US science fiction and science, using the tautology ‘terraforming Earth’ as a site for the study of the cultural politics of the Anthropocene. In ‘The Birth of Geopower’, Ingrid Diran and Antoine Traisnel propose to supplement Foucault’s analysis of biopower with a study of governmentality at the geological level, or geopower, which subsumes the relation of organic and inorganic matter into the explicit calculus of power. Where bio-politics makes legible the politics of man as living being, geo-politics brings into question man as a collective geological force.

Derek Woods is a postdoc in the Society of Fellows at Dartmouth College. He works on ecotheory, science and technology studies, and contemporary Anglophone literature and media. 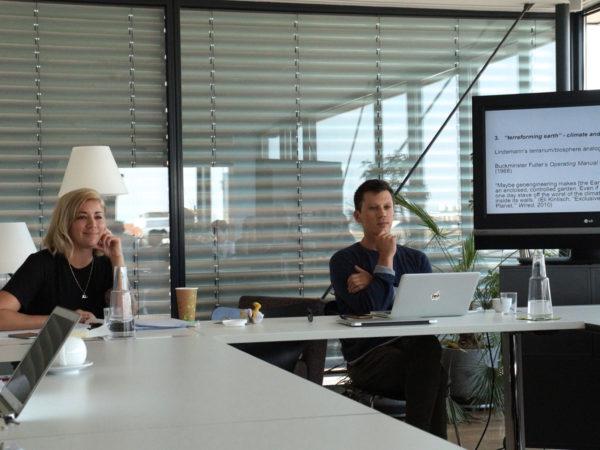